Putting employers to the test ?

Putting employers
to the test ?

What would it be like to be forced to have an HIV test as part of your job interview? And how would it be to have the job offer withdrawn if your HIV test came back positive? Imagine having HIV and being fired from your job because of it.

While most of us in western Europe now enjoy relatively progressive work place policies, this wasn’t always the case. Employment Action follows one thread in the fight against anti-HIV discrimination in the UK workplace.

Follow the story of Act Up’s fight against Texaco, and the broader strategy that moved the campaign beyond just demonstrations.

At the start of 1992 Act Up chapters in the UK joined forces with allies in Europe for a concerted campaign against HIV discrimination in the work place. The first target was the European Commission.

In February 1992 Act Up began an 18 month sustained campaign against petrol company Texaco for their policy of compulsory pre-employment HIV testing.

Activists urged people to use Texaco’s free phone number to complain against the policy and to join ‘fax blockades’ by faxing protest posters to the company’s offices from across the world.

For the first time in its history, UK Act Up chapters joined together to develop a single unified protest campaign, enhanced by local and national protest actions. An eight-page booklet was published, detailing information about Texaco’s policy and how to take action against it. Thousands of campaign flyers were distributed across the UK, triggering boycotts of Texaco products, and hundreds of phone calls to their customer phone line.

As a result, tens of thousands of protest post cards were sent to Texaco’s chairperson, while thousands of flyers urging customers to boycott Texaco petrol were placed on the windscreens of cars across the nation. 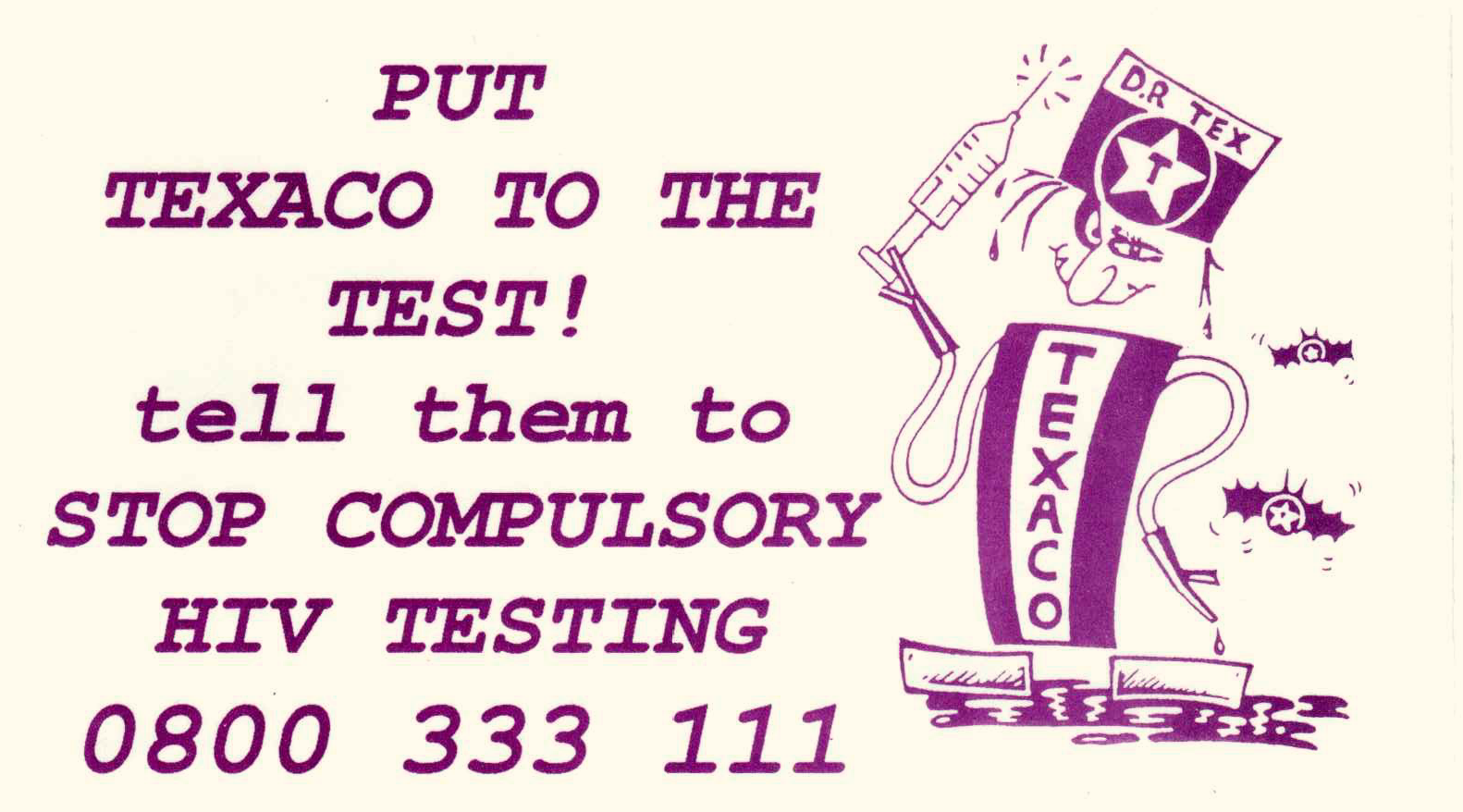 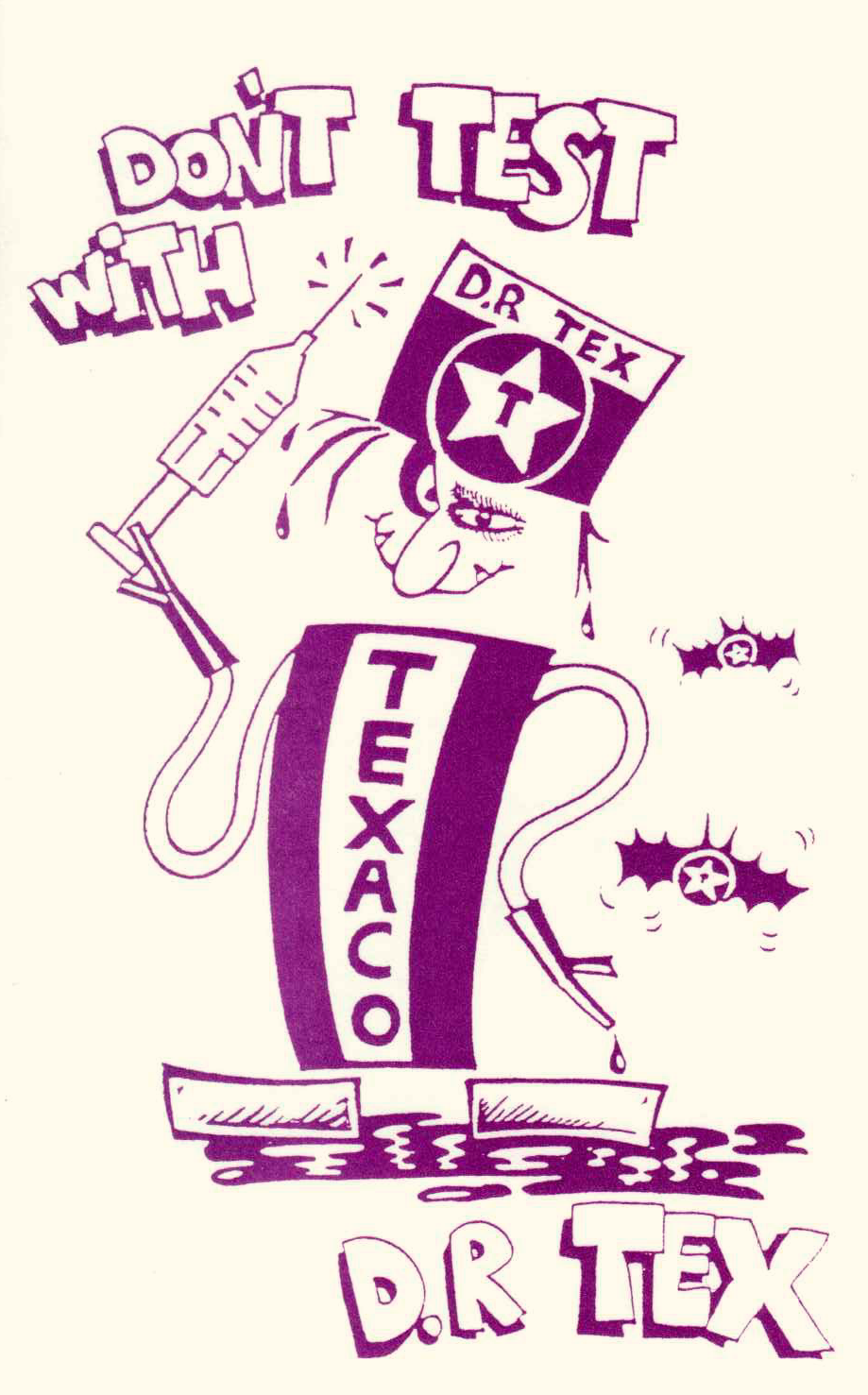 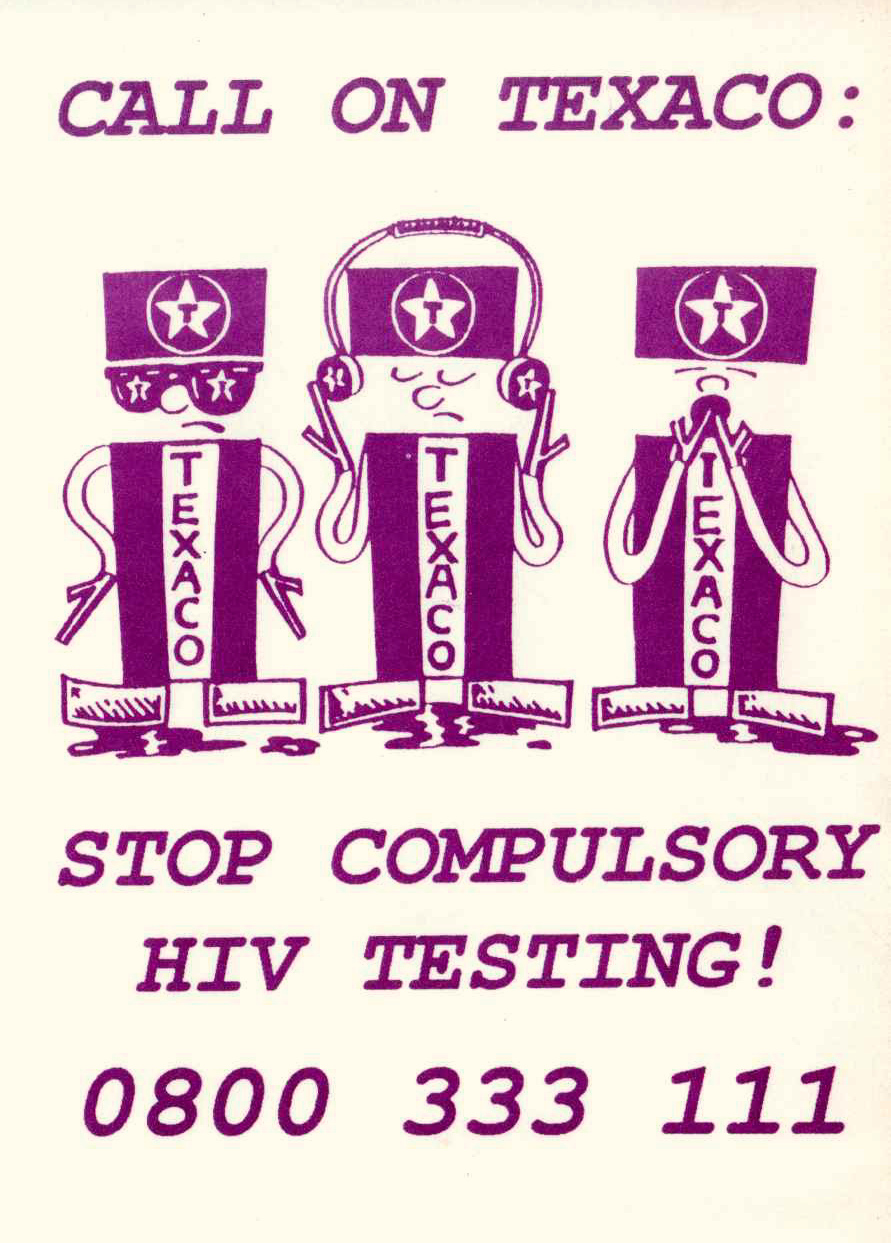 Meanwhile, fluorescent Out of Order (for HIV discrimination) stickers started to appear in the middle of the night on the petrol pumps of 24-hour petrol stations. This effectively closed the petrol station until the morning: attendants being unable to leave their counters to remove the stickers.

These actions continued on a rolling cycle for over a year, with Texaco refusing to relent. 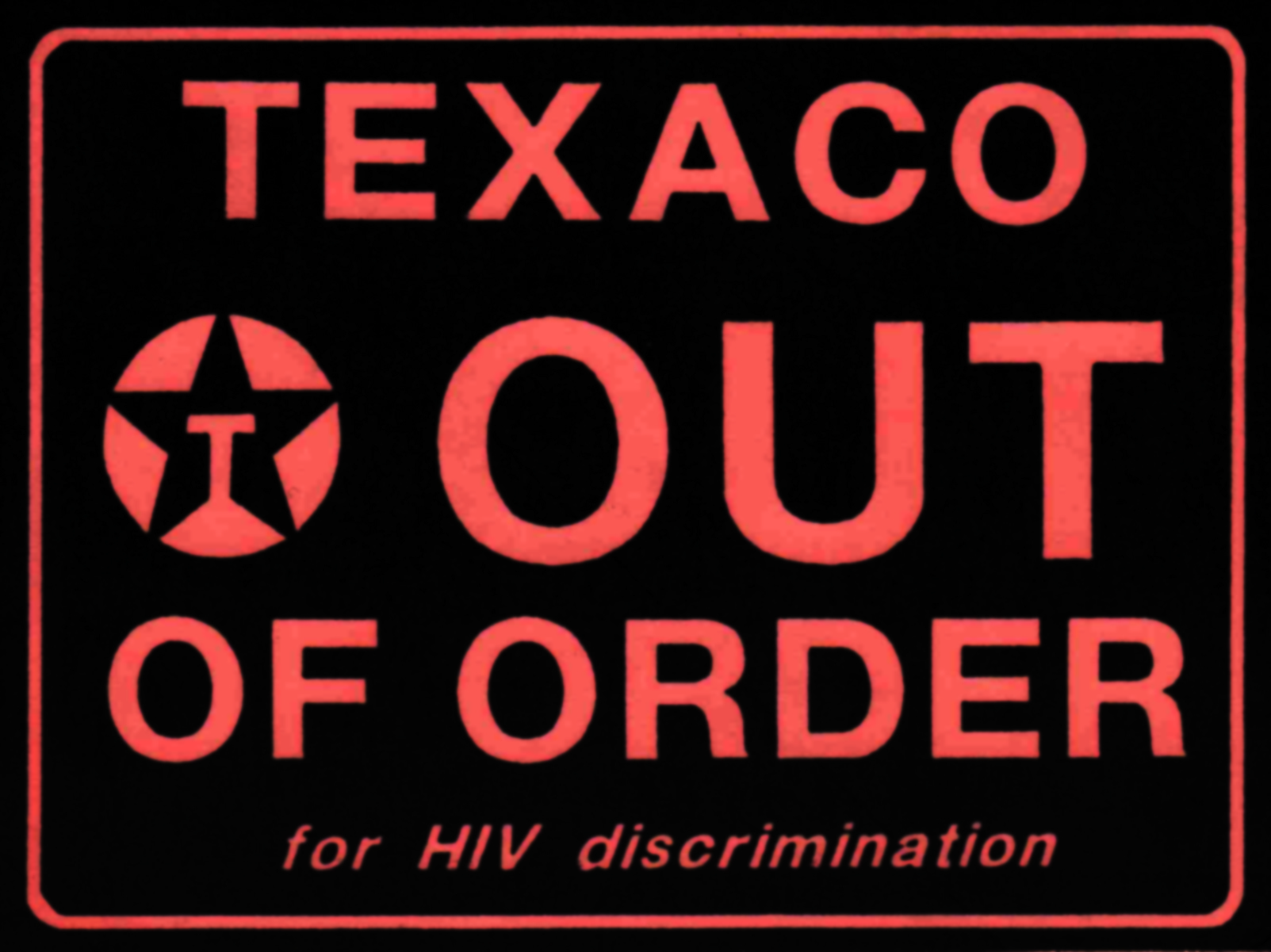 In April 1993 Act Up chapters across England held a national week of action against Texaco, blocking the entrance to Texaco service stations in four cities across the country.

The week of action culminated in a surprise invasion of Texaco’s Canary Wharf HQ. As demonstrators shouted slogans in the company’s entrance lobby, security officials dragged Act Up out of the building, leading to cuts and bruises. 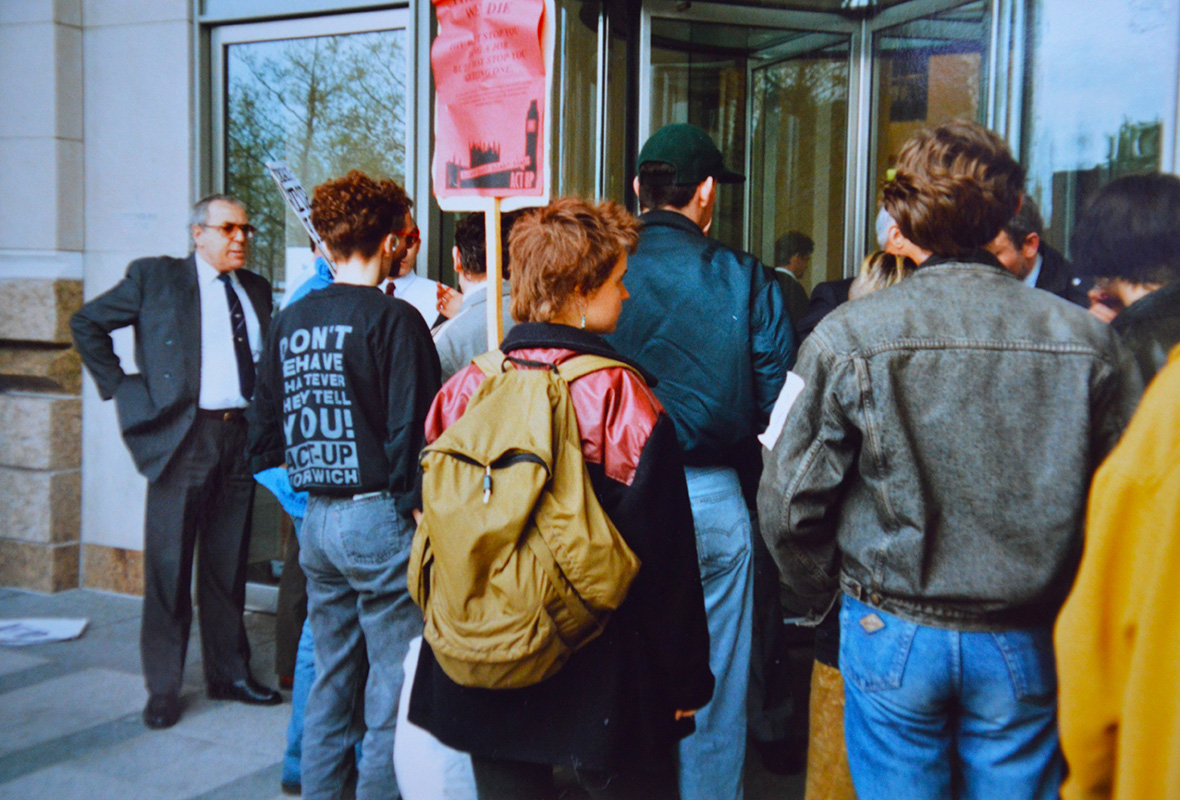 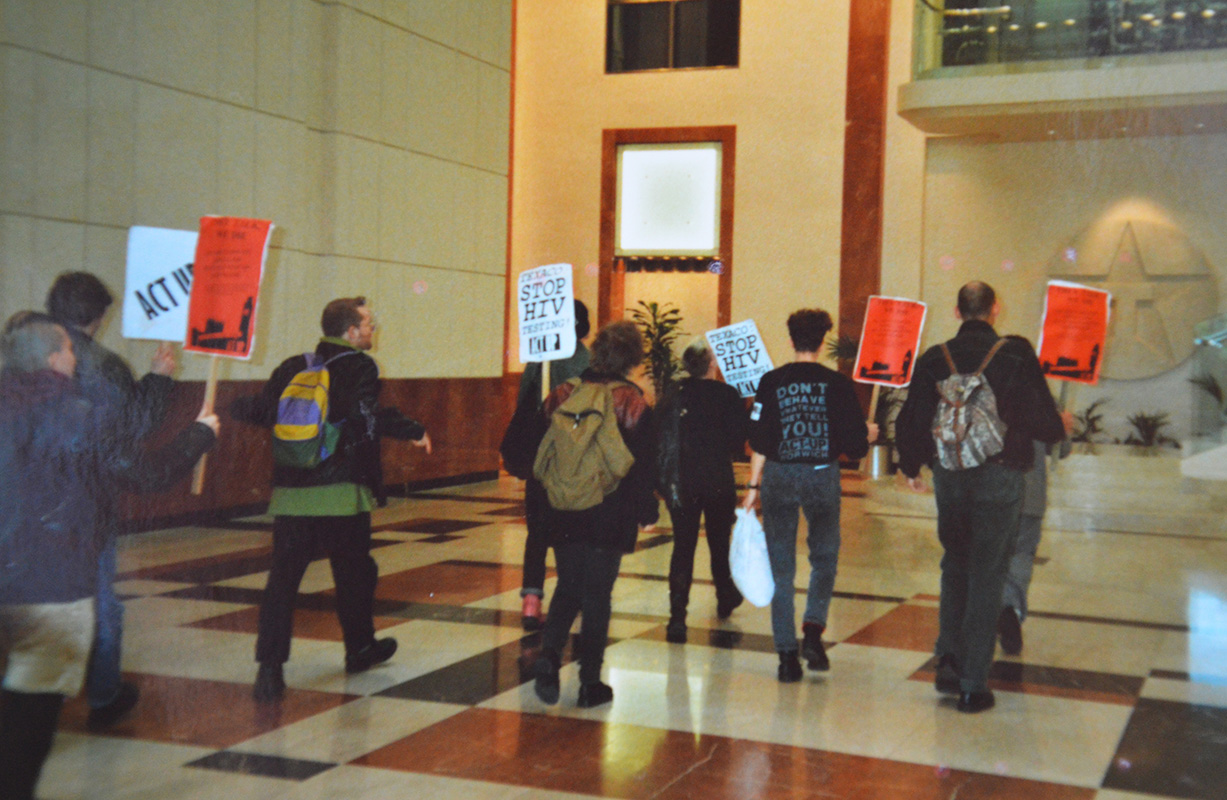 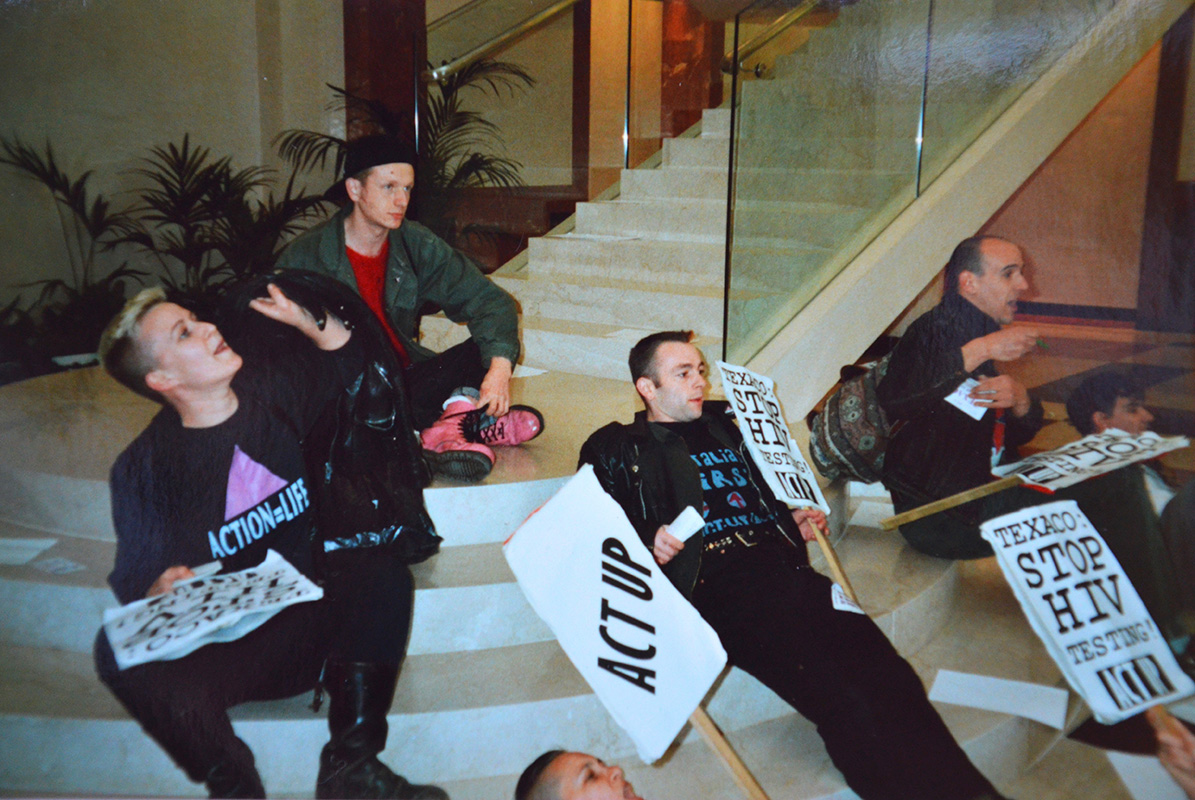 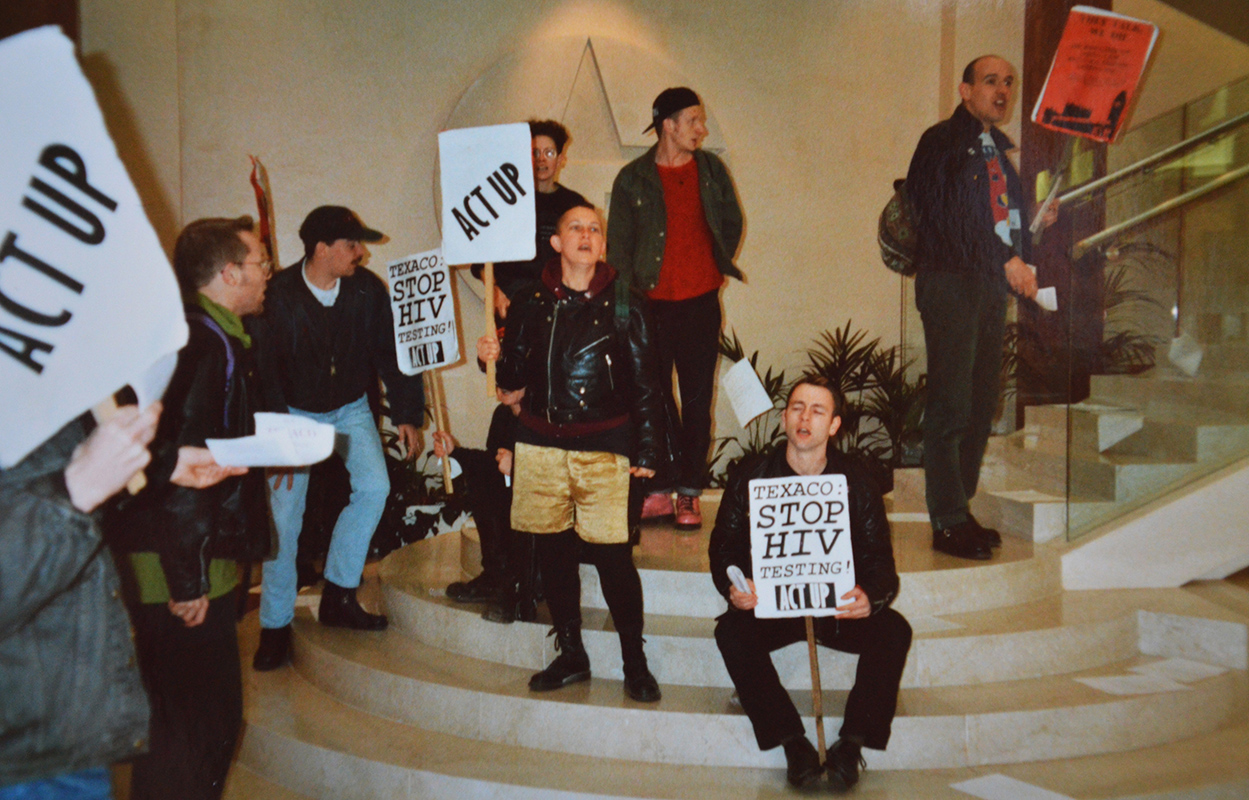 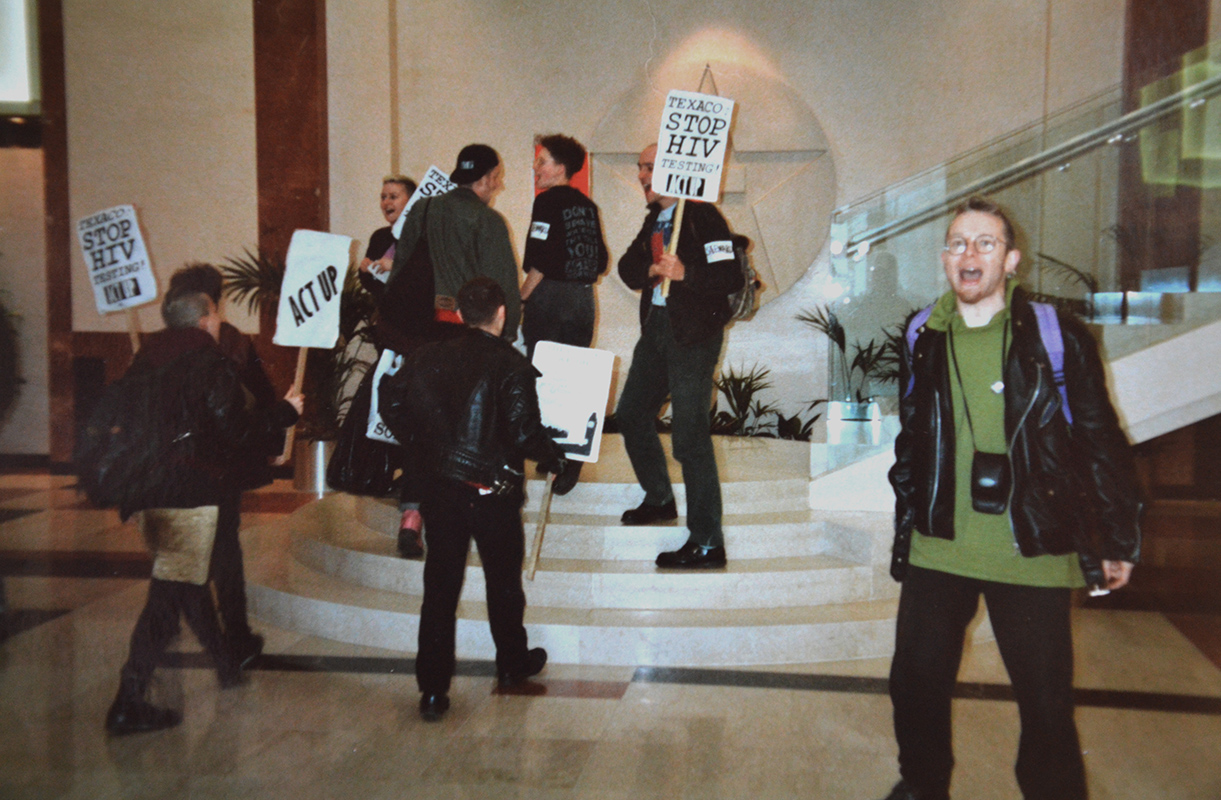 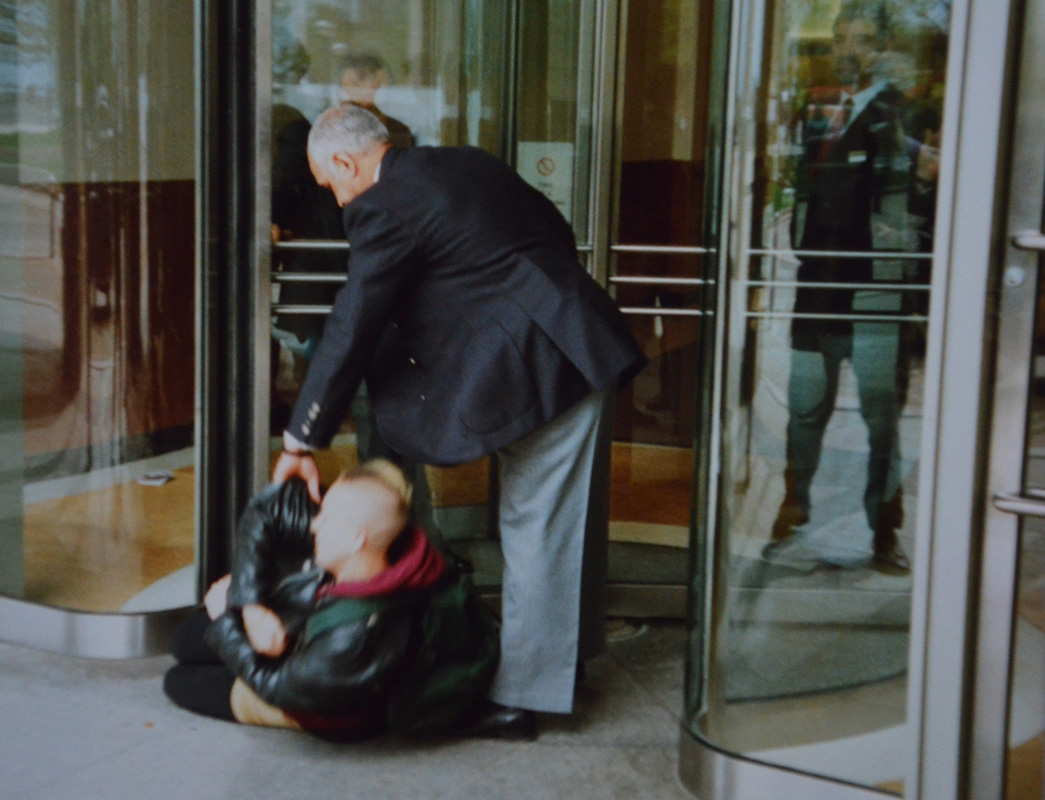 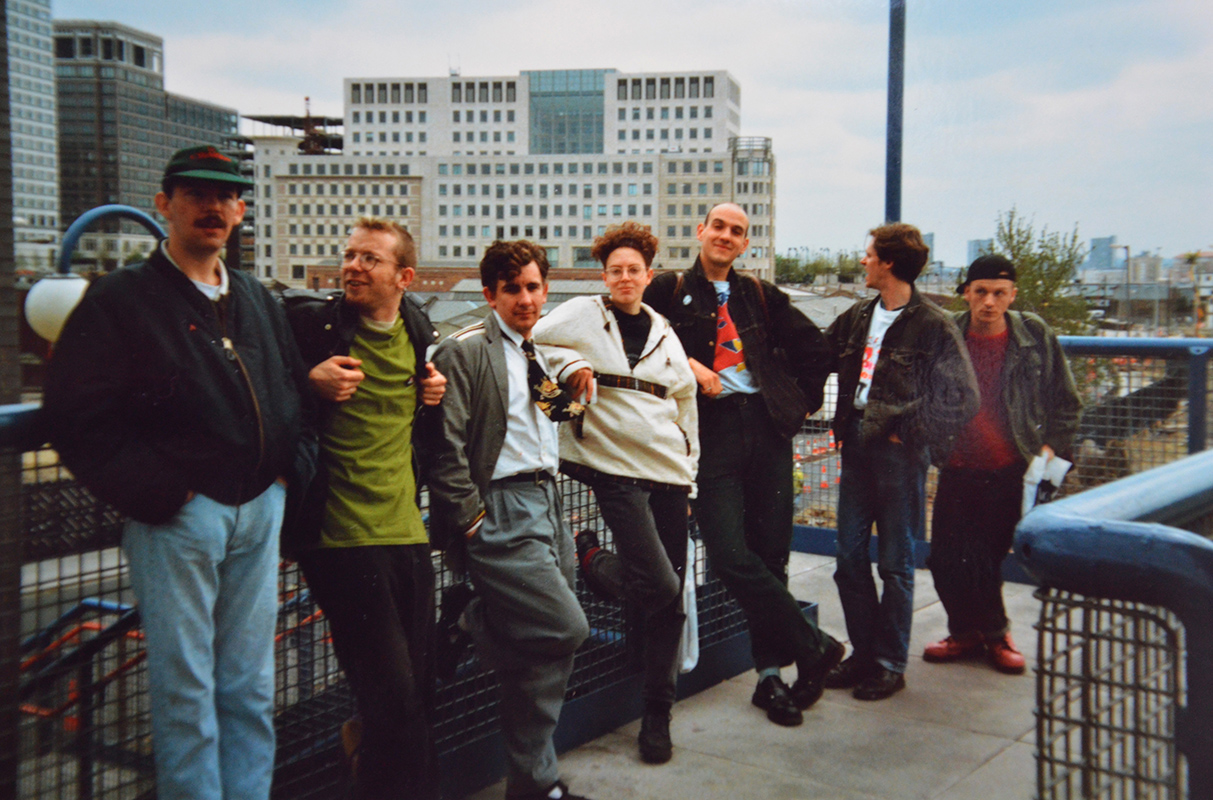 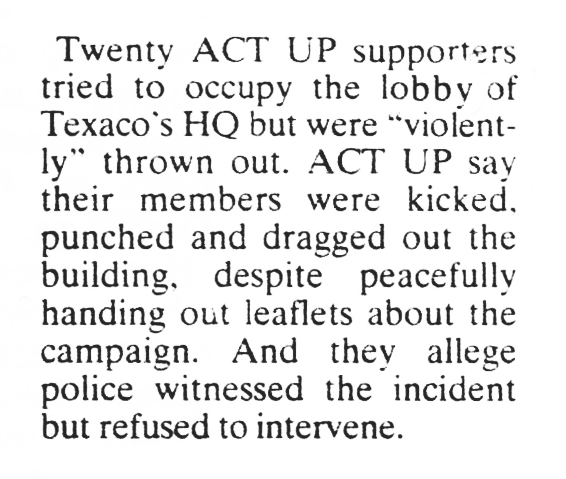 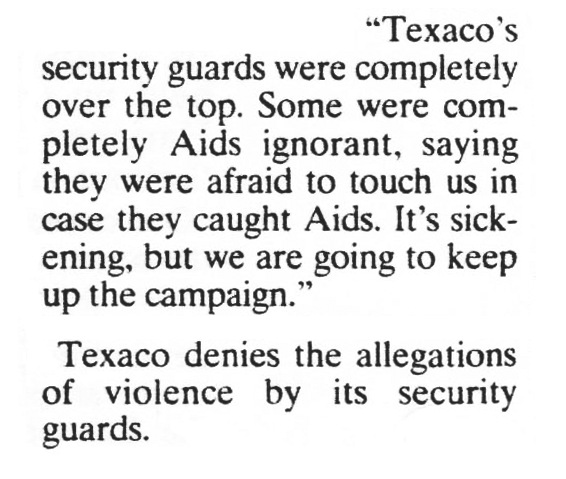 At the same time Act Up widened its focus by launching their Employment Action! Campaign, calling for changes in the law plus anti-discrimination policies in the work place.

In August 1993 Act Up activists met with top executives of Texaco to discuss their policy. Texaco agreed to seek a review of the policy and Act Up effectively put their year-and-a-half campaign on hold until the policy was reviewed.

In 2010,  following campaigns by many different activists and organisations including Act Up, the UK Equality Act brought full work place protection for all disabilities – including HIV. The Act made it illegal to discriminate against someone with HIV in many aspects of employment, including recruitment. 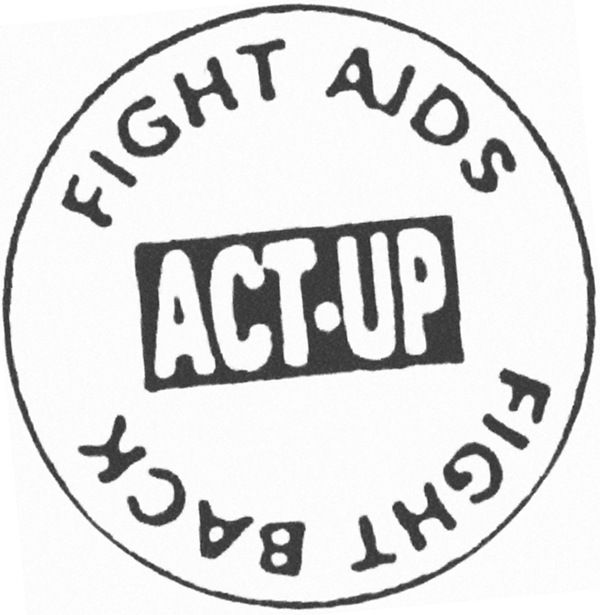 This is a work in progress. Visit us again soon to explore reflections on this campaign as the project develops. 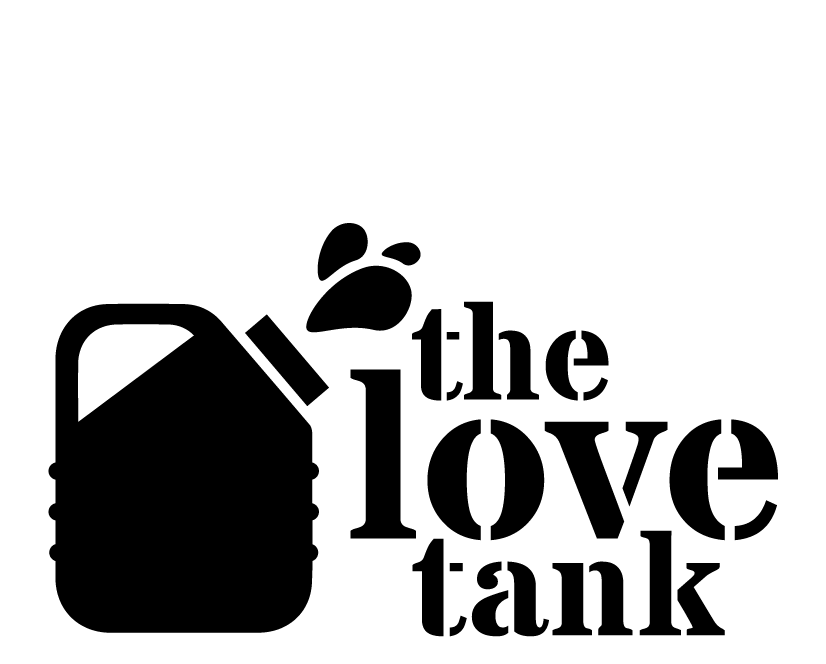 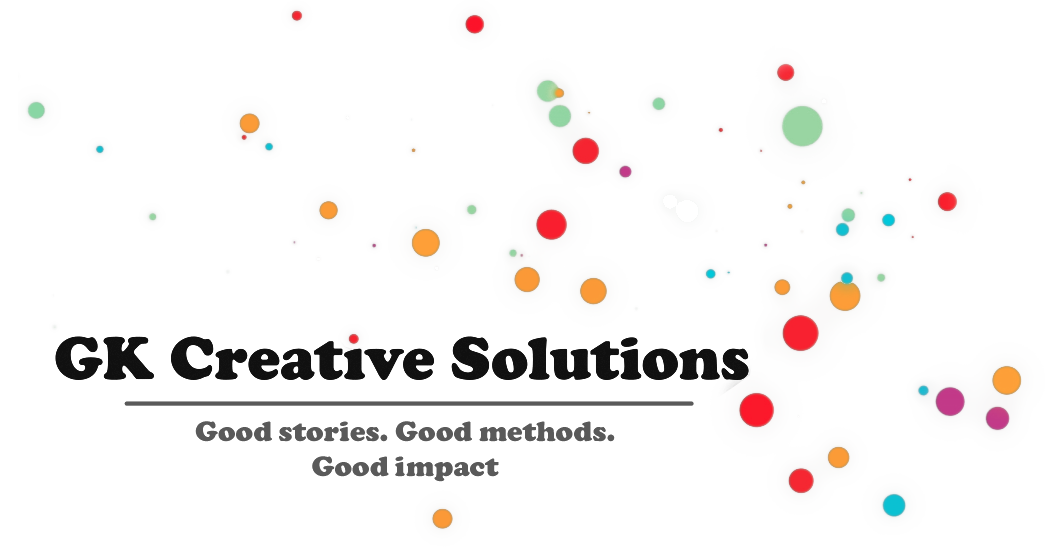